“A Timeline for the Future” Exhibited at FADA Gallery 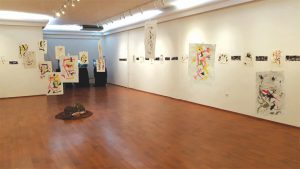 Last month, works by Portuguese artist Carlos Cabral Nunes were featured in a solo exhibition hosted by the Department of Communication and Design. “A Timeline for the Future: Stories of Tenderness, Love and Sorrow” was open for viewing from January 15 to 24 at the FADA Art Gallery.

Born in Mozambique, the artist moved to Portugal with his family as a child, and later studied at the Art Academy in Remscheid, Germany. In 1993 he became interested in the concept of global art. This led to his role in the establishment of the nonprofit association Colectivo Multimédia Perve, of which he is a founding member and artistic coordinator.

Prior to his exhibition at Bilkent, Mr. Cabral Nunes had participated in more than 40 solo and group exhibitions in Portugal, Senegal, Spain and India, as well as the traveling exhibition “Lusophonies,” which came to Turkey in late 2019. His works include paintings, installations, interactive multimedia and photography. In 2001, he received both the Youth Prize for Contemporary Art at the 11th Vila Nova de Cerveira Biennial and a National Award for Multimedia in the category “Visual Design and Interaction.”