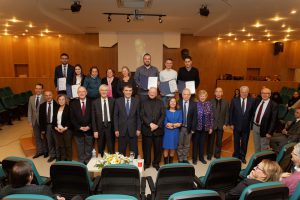 On Thursday, December 7, a ceremony was held to commemorate Orhan Alisbah (1910-1989), one of Turkey’s best-known mathematicians, and his son Bilsel Alisbah, former lecturer at Bilkent University, who passed away on July 2, 2017. The ceremony included the presentation of this year’s Alisbah Fellowships.

In 1998, Bilsel Alisbah had begun presenting fellowships to Bilkent University Department of Mathematics students each year in memory of his father. This year, following the loss of the younger Mr. Alisbah, the family decided to present another fellowship, in his memory, for Faculty of Education students.

Among those in attendance at the ceremony were Tara Alisbah, Bilsel Alisbah’s daughter; Prof. Ali Doğramacı, president of the University Board of Trustees; Rector Abdullah Atalar; Provost Adnan Akay; Vice Rectors Kürşat Aydoğan and Orhan Aytür; and other members of the university administration.