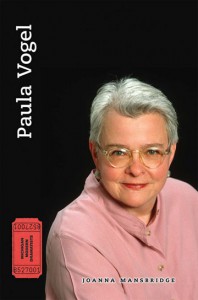 Asst. Prof. Joanna Mansbridge, a newly appointed faculty member in the Department of American Culture and Literature, has just published a book in the “Modern Dramatists” series from the University of Michigan Press.

“Paula Vogel” is, according to the publisher, “the first book on one of America’s most eminent playwrights.” Noting that “Paula Vogel’s plays engage with vexed topics—such as domestic abuse, prostitution, and AIDS—using formalist strategies to defamiliarize and historicize how these topics have come to be framed as sensationalized ‘issues,’” the publisher’s description continues: “Dr. Mansbridge looks closely at the way Vogel’s work questions contemporary American culture, while also pointing to the way her plays speak back to the canon and rewrite works by Shakespeare, Edward Albee, and David Mamet. Grounded in cultural materialist, feminist and queer theory, and theater and performance studies scholarship, the book examines the theories shaping the playwright and her plays, the production and reception of her work, and the aesthetic structure of each play.”

On December 22 and 23, at the Bilkent Chamber Theater in the FMPA Building, students from the Department of American Culture and Literature will stage Vogel’s Pulitzer Prize-winning play “How I Learned to Drive,” with Dr. Mansbridge directing.