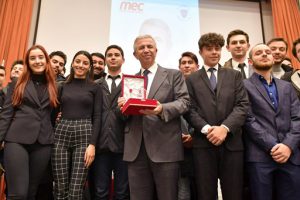 Last Tuesday, December 17, Ankara Mayor Mansur Yavaş visited Bilkent University and gave a talk as a guest of the Management and Economics Club. The event attracted a large audience that included many students and a number of faculty members as well.

Mr. Yavaş began his talk by providing an overview of mayoral duties and city management in general. He then discussed some of the projects being carried out under his administration, in areas including road construction, urban transportation and the municipal water system.

With respect to road construction, always a topic of interest in Ankara, he noted that road work is going on “day and night” in the municipality, including in the Bilkent district. “We work all over Ankara,” declared the mayor. “We’ve just completed an asphalt tender. As you will have noticed, the construction crews work around the clock. Work in the Yaşamkent district will be completed within 10 days, after which we’ll focus more on this side of the city.”

In his remarks, Mr. Yavaş also highlighted the expansion of the city’s “Mavi Masa” service – which offers citizens the opportunity to bring their ideas, opinions, needs and complaints to the attention of the city government – to a new platform. “Currently, as well as our 24-hour Mavi Masa phone number, we have a form that can be filled out online,” he said. “Especially on weekends, I review the complaints myself. We’ll soon have a Mavi Masa mobile application as well. After it becomes available, it will be even easier for us to present our projects to the public and get their opinions. We’re ready to listen to anyone who has an idea for the city.”

Following his talk, Mr. Yavaş answered questions from audience members about such topics as green areas and city squares, and then joined students and instructors for a photo opportunity.