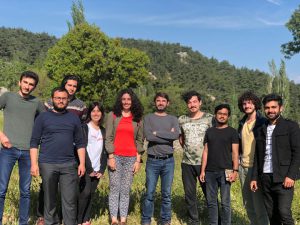 At the end of last semester, students in the HART126 Archaeological Planning or Planning and Drawing in the Field course took a two-day field trip to Labraunda, an archaeological site situated near the modern town of Milas. The Labraunda excavations are directed by Dr. Olivier Can Henry, an adjunct research scientist in the Department of Archaeology at Bilkent, and are being conducted in partnership with Bilkent University.

During the trip, students had the opportunity to gain firsthand experience in the field, putting into practice the theoretical knowledge they had acquired in class. This included drawing their own plans of some of the best-known buildings at Labraunda, such as the temple of Zeus Labraundos and the Oikoi of Idrieus; practicing their skills with the dumpy level, an instrument used by archaeologists to survey a site; and flying a drone over the remains of the ancient religious complex.

In addition, the field trip gave participants the experience of immersing themselves in a particular site, sparking informal and lengthy discussions on topics ranging from Carian history and ancient architecture to cultural identity and material culture in antiquity.