Arrival at the Sublime Porte: Bilkent and the National Library of Scotland Research Collaboration

12 November 2018 Comments Off on Arrival at the Sublime Porte: Bilkent and the National Library of Scotland Research Collaboration 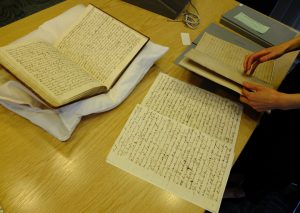 In 1812, Henrietta Marchant Liston, botanist and diarist, arrived in the capital of the Ottoman Empire, İstanbul – better known to most Europeans at the time as Constantinople. She traveled from her hometown, Edinburgh, along with her husband, who had been appointed British ambassador to the Sublime Porte. Her journals, which are held by the National Library of Scotland, describe her journey to Constantinople and her experiences there. Full of considered viewpoints and witty, calculated remarks, they provide significant insight into the Ottoman community and Anglo–Turkish diplomacy.

To delve deeper into Ms. Liston’s writings and share them with a wider readership, Assoc. Prof. Mehmet Kalpaklı and Dr. Özden Mercan of the Department of History and Asst. Prof. Valerie Kennedy and Asst. Prof. Patrick Hart of the Department of English Literature have initiated a collaborative project with Dora Petherbridge, curator at the National Library of Scotland: “Henrietta Liston: Approaching Constantinople, 1812–1820.”

In an interview with Bilkent News, Dr. Hart talked about his participation in this project and the prospective results of the research.

What motivated you to start this project?

The initial motivation for the project came from our first look at Henrietta Liston’s Constantinople journal. Her style is distinctive – I expected something much like Lady Mary Wortley Montagu’s famous embassy letters from 100 years earlier, but Liston’s voice is less aristocratic, more middle-class, and while not as witty as Montagu, she has a wry humor and a sharp observational eye all her own. The cultural and historical significance of the journal quickly became apparent, but it was Liston’s voice, speaking across 200 years, that first caught my attention.

What do you hope to achieve by completing this project?

We hope to make Liston’s writings about her journey to Istanbul and her time living there accessible to everyone who might want to read them. This might include academics working on travel writing, on Romantic Orientalism, or on 19th-century international relations and diplomacy. But we hope Liston’s journal and letters will interest general readers, too – anyone who might be intrigued by this well-traveled woman’s experiences in the Ottoman world.

For further information and a video about the project: http://liston.bilkent.edu.tr/