09 April 2019 Comments Off on Artistic Pleasure 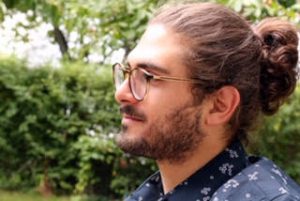 How can we evaluate a song’s success? Nowadays, there are charts like the Billboard Hot 100, which measures how successful a song is in terms of the number of people who listen to it (that is, who either buy the track, or listen to it online). But how can we listen to songs or artists that we haven’t heard of? Perhaps somewhere in the world, someone has recorded a beautiful song; but since we don’t know about it, we can’t listen to it. Does this mean that the song isn’t successful?  In terms of economic success, we would say it’s not. But from an artistic point of view, such a beautiful song would be considered successful indeed. Thus, in my view, charts like the Billboard Hot 100 don’t measure the artistic success of a song, but only the success of its marketing. This is because our perception is influenced by becoming accustomed to the sounds that we hear most often. If we’re forced to listen to contemporary hit songs sung in English every day, our brains can’t perceive the beauty of other songs coming from different cultures. Since contemporary hit songs are marketed intensively, we’re potentially estranged from beautiful works of musical art.

The work of the Indian musician Ravi Shankar was initially not very popular. Shankar started his career as a dancer but then began to study Indian classical music, living with his guru Allauddin Khan according to the traditional gurukula system of education, in which students live with their teacher. (Gurukula is a combination of two words: guru, “teacher” or “master,” and kula, “family” or “home.”) 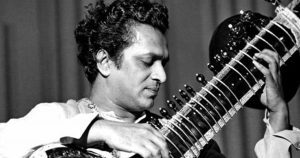 Shankar was trained in the sitar and surbahar (bass sitar), and was taught ragas and the musical styles dhrupad, dhamar and khyal. Let me explain each of them briefly. A raga is a melodic framework for improvisation and composition. Dhrupad is an ancient musical style that aims to develop the human consciousness and nervous system through sound, and bring the mind to a peaceful, meditative state. Dhamar is light, romantic music, whose text concerns the antics of the god Krishna. Khyal is modern classical music. The word khyal means “imagination”; therefore, as might be expected, this is a more flexible form than dhrupad.

After Shankar completed his musical training, he became very successful in Europe; he participated in the celebrations in Paris that marked the tenth anniversary of UNESCO, and toured Europe, the USA and Australia. He also became the first Indian to compose music for non-Indian films. However, his popularity really started to take off only after George Harrison, the lead guitarist of the Beatles, began to collaborate with him.

This collaboration came about through a chain of events. After the release of their successful “Revolver” album, the Beatles began taking drugs to enhance their creativity, initially not being fully aware of the adverse impact of these drugs on the body. But after the release of “Sgt. Pepper’s Lonely Heart Club Band,” the band members realized that they could not continue to pursue such an unhealthy lifestyle, and hence tried to redirect themselves toward spirituality. At the time, a guru known as Maharishi Mahesh Yogi was very popular in Europe. The Beatles attended one of his workshops and immediately came under the influence of this so-called spiritual leader. In this way, the Beatles were introduced to Indian culture. But although Paul McCartney, John Lennon and Ringo Starr sat with the Maharishi and listened to him, they were not that receptive to what he was trying to say or teach them. However, he influenced George Harrison so much that spirituality became his main preoccupation. His enthusiasm for Indian spirituality led him to meet with Indian musicians, one of whom was Ravi Shankar.

Shankar’s effect on Harrison was unimaginable; we can hear the change in direction of his recordings after the two men became acquainted. One of Harrison’s best-known compositions, “Norwegian Wood,” features the sitar, but the recording of this song occurred quite early in Harrison’s spiritual journey. Listening to the more sophisticated composition “Within You Without You,” written in 1967, we can easily understand that Harrison was very much influenced by the philosophical ideology of Indian spiritualism.

Although Shankar had begun gaining recognition in the USA and Europe even before he met George Harrison, his music was not part of popular culture. This changed after he became associated with the Beatles; the melodies of India echoed on radios everywhere, and Ravi and Indian music found a place in popular culture. This was because of marketing. Being a close friend and mentor of George Harrison would of course have been great marketing for anyone, considering the fact that the whole world was talking about the Beatles.

But why are we so obsessed with what is popular, and why do we simply accept whatever is given to us rather than trying to find originality? Nonetheless, I can definitely say that popular music will continue on its way, and fans will listen to this music excessively. But those who are trying to find artistic pleasure will, more than others, satisfy their souls and find beauty in music.