20 October 2014 Comments Off on BELS and ÖBL Experience Berlin 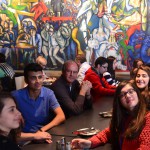 On the 25th anniversary of the fall of the Berlin wall, 29 students and faculty members from Bilkent Erzurum Laboratory School (BELS) and İDF Bilkent High School (ÖBL) enjoyed mingling with the crowd as they watched the festival celebrating the reunification of Germany along a street near the Brandenburg Gate in Berlin. This historic area was just one of the places visited on the school trip to Berlin during the bayram holiday. A group of students also visited the local mosque.

Throughout the  trip, history, entertainment and culture were on the itinerary. World War II was represented by a sad and thought-provoking tour of Sachsenhausen, a concentration camp on the outskirts of the city. In addition, the students attended a class at the Anne Frank Center. They moved on to the Cold War by visiting a nuclear shelter, Checkpoint Charlie and the GDR Museum. A performance of “Tosca” directed by Daniel Barenboim at the State Opera was the high point of the cultural part of the trip. The Gate of Ishtar at the Pergamon Museum and the Museum of Islamic Art rounded out the program.

Contemporary life was represented by a performance of the Blue Man Group, with audience participation, and an interactive tour of the Computer Games Museum, where the students were amazed at the “ancient” games of the 1990s. One day was spent in Weimar, the city of Goethe and Schiller, Bauhaus style and the Weimar Republic. The group enjoyed the change of pace after several hectic days in Berlin.

The group got around Berlin mostly by using public transportation and walking, which allowed for a more natural way of experiencing the city.