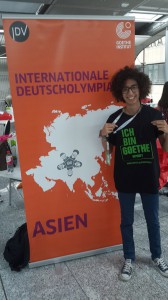 Although Ece had to spend all day taking tests, she was rewarded for her efforts with a first-place finish. “It was an honor for me, a student from eastern Turkey, to hear people talking about me coming in first in such an important language competition,” said Ece, recalling her excitement that day.

But the journey didn’t end in Ankara. In August, winners of the regional German Language Olympics from 50 countries met in Frankfurt am Main, Germany. Ece represented Turkey, while at the same time taking advantage of the opportunity to improve her German.

During the 14 days of her stay, she visited the most exciting museums in and around Frankfurt, enjoyed the view of the Main, had a chance to visit Heidelberg and met people from around the world and became friends with them. It was easy for her to get used to the differences, she said, because as a BELS student, she had already encountered different cultures and learned to respect them.