17 March 2014 Comments Off on Berkin Elvan Commemorated on Campus 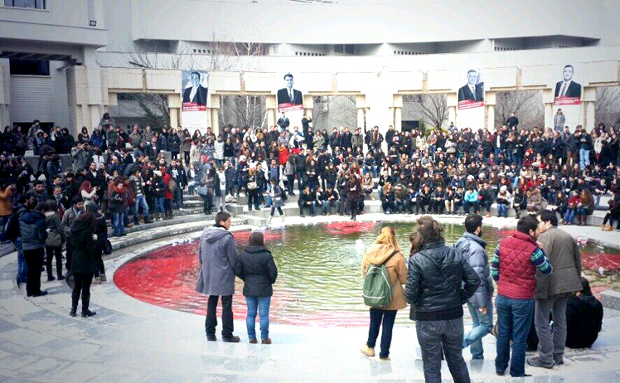 Last Tuesday and Wednesday, March 11-12, Bilkent students gathered on Main Campus to stage a sit-in demonstration in memory 15-year-old Berkin Elvan, who died early March 11 after 269 days in a coma, a victim of the events surrounding the Gezi Park protests.

Berkin had gone out to buy bread when he was hit on the head by a tear-gas canister in the Okmeydanı district of İstanbul on June 16, 2013. He had been in intensive care in the hospital for 269 days.

Protests following the boy’s death were widespread in cities and on university campuses throughout Turkey. In Ankara, demonstrations started with one protester sitting alone with a loaf of bread and a sign reading “I am Berkin” in the central Kızılay district. The protest grew as many people joined him, silently sitting on the steps of the city’s Güven Park.

At Bilkent, the focal point of the demonstrations was the fountain in front of the Faculty of Science building, where some students sat on the steps with others gathering behind them. Banners and placards expressed protestors’ sorrow and determination.