17 September 2013 Comments Off on Best 10 Live Acts I Saw This Summer
Are You a Music Lover?
Looking for a Music Columnist
This is Emre Berberoğlu’s last column for Bilkent News. We are looking for a student columnist to write about music for the 2013-2014 academic year. Candidates should submit a writing sample to seckin@bilkent.edu.tr as soon as possible. Good luck!

Garage rock band Palma Violets played their first-ever concert in Turkey on the second largest stage of the Rock’n Coke Festival. Although they’re pretty popular in England, they didn’t attract much of an audience in İstanbul. There weren’t more than a hundred people watching them, but the band didn’t let this get their mood down and played an incredibly energetic set.

“All my Prodigy people!” You can’t expect a bad concert from Prodigy, can you?

To be honest, I wasn’t planning to watch Klaxons at this year’s Rock’n Coke Festival. The reason was, a few years ago I did get to see them live at another festival, and it was a decent show. But this time, I found myself in the front row with some friends, and yeah, watching them again was a great idea. We didn’t stop jumping even for a second!

BBC Radio 1 DJ Rob Da Bank prepared such an amazing set for the Sonar audience it nearly blew our minds. A nonstop rave took place on the festival’s main stage for an hour and a half. This guy knows how to make you dance!

This summer electronic music admirers had the opportunity to hear some brilliant electronic music artists at Suma Beach. For me, this place was like a sanctuary, because they offer you a great beach in the daytime and a perfect open-air dance floor at night. Sonja Moonear basically played one of the best deep-house sets I’ve heard in a long time.

One of the best ways to end the summer was probably watching Belle & Sebastian’s live performance and dancing to their heartwarming melodies. This exhausting summer, seeing them in concert made us forget about all the problems that surround us.

Electronic music geniuses Todd Terje and Lindstrøm decided to go on a tour together this summer. They became such a good duo during this tour; their live performance is definitely worth seeing. These guys work very hard on stage by putting up all the synths and vocals of the songs at the exact same moment.

Watching Arctic Monkeys live had been one of my biggest desires. I think I waited more than 7 years to see these guys live. Finally, I got the chance this summer, and what a stunning performance it was! These English lads know how to make you put your dancing shoes on! 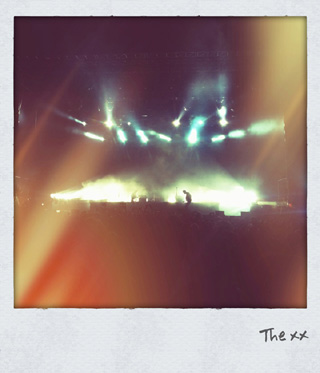 What makes The xx’s live performance different is, when they go on the stage, they don’t just focus on playing their songs like the album versions. On the contrary, with the huge help of the band’s brain, Jamie xx, they connect songs to each other by using parts of other songs. As a result, you end up with a marvelous show.

This was Roger Waters’s second visit to Istanbul. His first was in 2006 with “The Dark Side of the Moon Live” tour, but this time he was here with a much bigger production called “The Wall.”  Everyone in the audience was in a state of high expectation about this concert, not only music-wise — people were also waiting for Waters to comment about the ongoing Gezi Park protests. The co-founder of Pink Floyd didn’t disappoint us. The eagerly awaited speech came after “Another Brick in the Wall Part II.” After Waters greeted everyone in Turkish, pictures of Ethem Sarısülük, Mustafa Sarı, Abdullah Cömert and Ali İsmail Korkmaz appeared on the huge Wall. At that moment everyone in the stadium collectively started chanting, “Her yer Taksim, her yer direniş!” And at the end of the performance, Waters stated that among all the cities they had been to during this long tour, the audience in İstanbul had related to the concert the most!