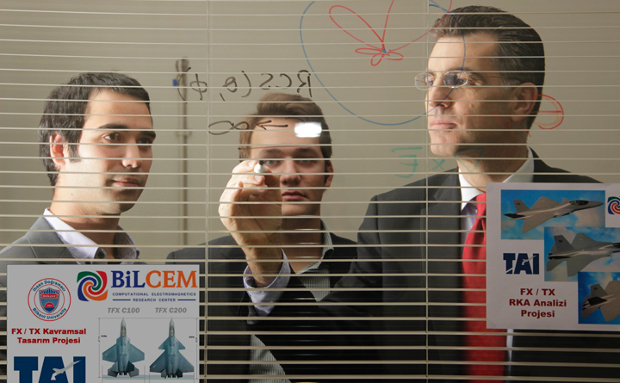 Researchers at the Bilkent University Computational Electromagnetics Research Center (BiLCEM) are working on a national project to design the future jet aircraft for the Turkish Air Force.  Turkey is planning to replace its aging T-38 training aircraft and F-16 fighter jets with their next-generation counterparts starting in 2020. BiLCEM Director Levent Gürel states that the center is contributing to this important national endeavor by employing the state-of-the-art computational methods they have been developing over the years for the electromagnetic modeling of the new aircraft being designed by Turkish Aerospace Inc. (TAI). This effort involves the highly complicated computation of the scattering of radar signals from the aircraft.  The goal is to be able to predict the scattered signals that will come back to the receiving antenna of the radar. This “radar cross section,” or RCS, will determine the amount of visibility of the aircraft, which will ultimately lead to its detection.  Another goal is to reduce the visibility of the aircraft by muffling the RCS as much as possible, hence making the aircraft stealthier.

solution of extremely large matrix equations. Since 2006, BiLCEM researchers have been solving the world’s largest matrix and integral-equation problems in computational electromagnetics. Recently they have been working on problems involving as many as one billion unknowns that require the solution of gigantic one billion by one billion matrix equations. Such an enormous task is accomplished at BiLCEM mainly by the fast mathematical solvers developed there. In addition, BiLCEM researchers are harnessing the raw power of supercomputers by utilizing high-level parallel computing strategies.

BiLCEM was tasked with its part in this joint project with TAI by the Undersecretariat for Defense Industries. In addition to Prof. Gürel, Bilkent graduate student Mert Hidayetoğlu (EEE’13), Bilkent undergraduate EEE student Canberk Hallik (BLIS’10) and Carnegie Mellon undergraduate ME student Haluk Akay (BLIS’12) have contributed to this important and multidisciplinary national project.  Prof. Gürel invites graduate and undergraduate students to get involved in BiLCEM in order to contribute to critical projects and gain valuable experience. For more information, please visit www.cem.bilkent.edu.tr.