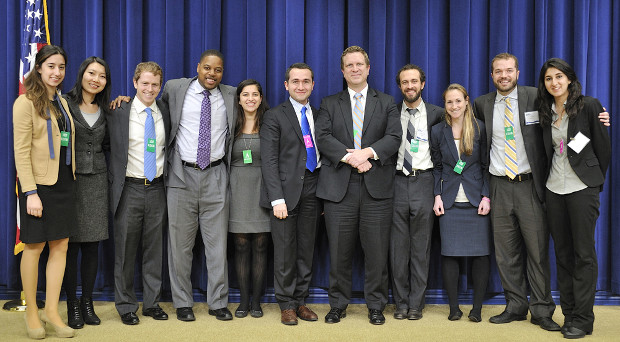 Mehmet Cengiz Onbaşlı (EEE/’10) and Defne Gürel (BLIS/’11) were members of an award-winning team at the Better Buildings Case Competition conducted at the White House by the US Department of Energy.

Pursuing the presidential goal of cutting energy waste from homes and businesses by half over the next two decades, the annual competition invites university student teams to develop and present ideas for increasing the efficiency of buildings. This year, teams from 14 universities participated in the challenge. The Massachusetts Institute of Technology (MIT) team (shown in the picture with Assistant Secretary David Danielson of the Department of Energy) included Electrical Engineering & Computer Science student Defne Gürel (left) and Material Science graduate student Mehmet Cengiz Onbaşlı (center). The team won two awards — the Best Proposal Award and the Most Innovative Solution Award — in the White House competition.

The MIT team brought together the diverse skills of students from a number of programs and departments. They won the Most Innovative Proposal Award by generating creative clean energy solutions to be used as models by businesses. The Best Proposal Award came in recognition of their investigation of methods for a city with a conservative political climate to encourage energy efficiency in the private sector.