Bilkent Archaeology Day: A Tradition in the Making

24 April 2019 Comments Off on Bilkent Archaeology Day: A Tradition in the Making 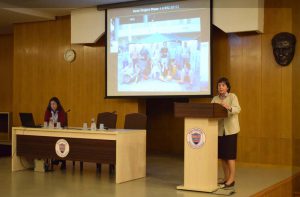 A primary goal of the first Archaeology Day was to better acquaint the audience with the department. During the first of two afternoon sessions, faculty members presented their current research; in the second session, researchers discussed the excavations of Labraunda, near Milas. (Bilkent now has an official partnership with the excavation team there, and sends Archaeology students as well as students from other departments to the site for internships.)

This year, the afternoon sessions had a different format, which organizers expect will be followed in future years as well, with the presentations dedicated to recent discoveries related to a specific topic representative of current trends in archaeological research, or to a particular cultural heritage. The topic chosen for 2019 was the Bronze Age: a vast subject, such that the sessions aimed only to present a selection of new data and discoveries.

As well as providing an opportunity to present work in progress and offer the latest updates on participants’ research, Archaeology Day aims to strengthen the link between the Department of Archaeology and the larger archaeology community in Ankara and Turkey, and also to reinforce the ties with other universities and research institutes.

To this end, the first afternoon session on the Bronze Age was presented by members of the department, while the second session featured scholars from outside Bilkent: academicians from Hacettepe, Ankara and İstanbul universities as well as a free-lance alumnus of Oxford University. Two Bilkent alumni, one currently teaching at Yaşar University in İzmir and the other at Onsekiz Mart University in Çanakkale, also presented papers and in addition served as moderators of the two sessions.

Bilkent Archaeology Day also encourages student participation. Both last year and this year, the event’s morning session consisted of a student symposium hosted by the Bilkent Archaeology Club, a tradition that the organizers hope will continue in the future. The 2019 symposium discussed “Magic and Rituals,” with speakers including students from the Hacettepe, Gazi and Ankara University archaeology clubs as well as that of Bilkent.

This year’s event in addition featured a unique offering: videos prepared by students from the Department of Communication and Design, including an animated presentation of the program; a video with segments taken during courses about the Bronze Age; and interviews asking students what they knew about the Bronze Age.

Bilkent Archaeology Day 2019 was well attended, with the audience including members of the public, who showed great interest in the topics discussed as the many questions asked to the presenters indicated.