The Society prefers calling the event a book “festival” rather than a “fair,” because it includes workshops and interactive sessions with authors as well as a book fair. The festival is open to everyone in Ankara, and many guests, especially from METU and Hacettepe University, were welcomed during this year’s event. 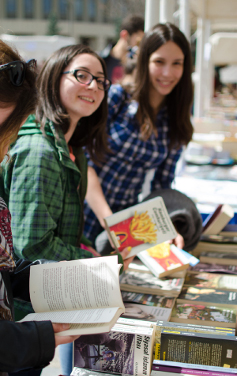 The festival area offered Bilkent students activities ranging from tasting the wares of a new donut seller to learning the art of paper marbling. But the highlight of the festival was the series of talks given by authors, with each talk preceded by a book signing.

On April 7, Hâkim Türkmen (Beyinsiz Adam), a Twitter phenomenon who recently published a book, and Tuna Kiremitçi gave a pair of very enjoyable lectures. On April 10, Canan Tan spoke to Bilkent students and guests during the lunch break; in the evening, Penguen Magazine cartoonist Serkan Altuniğne and writer Kaan Sezyum gave a special presentation. Cumhuriyet Kitap writers Sevgi Özel and Atilla Şenkon were also on campus during the festival for a book signing.