On November 25, numerous events and activities aimed at raising awareness of violence against women took place in Turkey as well as around the world, as part of the UN’s “UNiTE to End Violence Against Women” campaign. At Bilkent, the Social Awareness Projects (TDP) student volunteer organization brought the UNiTE campaign to campus, contributing to the UN’s effort to “orange the world.”

The color orange, offering a powerful image of sunny days in the future, had been chosen by the UN to represent the campaign. Taking up this theme, TDP volunteers hung white sheets in front of SA Building and invited everyone at Bilkent to leave a handprint in orange paint in order to express their opposition to violence against women.

In this way, the Bilkent community was reminded not only of the fact that violence against women is unacceptable, but also that those who suffer from abuse are never alone. And just as the UNiTE campaign’s name suggests, the event brought people on campus closer together. 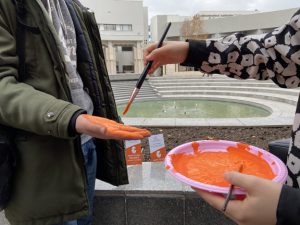