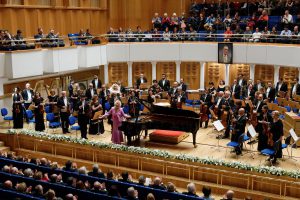 April 3 is the birthday of Bilkent University’s founder, Prof. İhsan Doğramacı (1915–2010). Each year, the university community celebrates the occasion as Bilkent Day, with events including the annual Bilkent Day Conference and a commemorative concert. This year, for the first time, an open meeting of the Board of Trustees was held after the conference as part of Bilkent Day.

All of the day’s events took place in the Bilkent Concert Hall. The Bilkent Day Conference opened with a presentation on “The State of the University” by Bilkent’s rector, Prof. Abdullah Atalar, in which he gave a summary of the year since last April 3, highlighting the university’s most recent academic, educational and research accomplishments. The presentation included various statistics concerning students, faculty, research, awards, university budget items and world university rankings, as well as information on recent initiatives, actions and investments, such as the approaching completion of the new dormitory and the planned construction of outdoor sports facilities behind the Dormitories Sports Hall.

Prof. Atalar concluded his remarks with a quotation from a paper by M. Erdem and K. Rose on “American Philanthropy in Republican Turkey” (published in the 2000 edition of “The Turkish Yearbook of International Relations”):

“While Robert College received substantial support from the Rockefeller Foundation, the person in Turkey who inspired the most foundation support during the 1950s and 1960s clearly was Dr. İhsan Doğramacı, who came to the foundation’s attention in 1955 as a newly appointed professor and head of the Department of Child Health and Pediatrics at the University of Ankara Faculty of Medicine….

“Doğramacı clearly impressed foundation officials as someone with the energy, drive and determination necessary to make an impact upon medical education in Turkey.

“His ‘charismatic leadership, energy, enthusiasm, and professional confidence’ earned their praise and inspired their confidence in him. Foundation staff discussions of Doğramacı describe him as a devoted physician concerned about the extremely high infant mortality in Turkey, determined to address the problem on a long-term basis by improving the education of pediatricians and other medical personnel, overthrowing the old German medical education system in favor of a teaching program based on modern American concepts and standards of teaching and research.”

Prof. Ali Doğramacı, chairman of the Board of Trustees, was unable to attend the event but had sent a letter to be read to the audience. In his letter, which was read by Board member Boğaç Üner, he quoted Prof. İhsan Doğramacı’s words:

“History is full of events where people kill their enemies. Our choice is to kill hostilities rather than kill enemies. For this, it is necessary to recognize and understand what is different from ourselves, from our institutions, from our societies. Let’s turn the differences into wealth by focusing on the areas where we will rise and rise together.”

Next, Prof. Ergül Tunçbilek, one of the Board’s two vice chairs, spoke about the two universities that Prof. Doğramacı founded, declaring that he was “a great visionary and lover of his country.” She also offered her own insight into the mindset that had led to his accomplishments: “There are three fundamentals of success – coming up with excellent ideas, doing quality work and finishing your work fast. We see that Hocabey followed all three of these principles. I remember him with deep respect and longing.”

Prof. Erol Arkun then shared his personal memories of Hocabey. Referring in particular to the year 1985, when Prof. Doğramacı founded Bilkent University, he spoke about how he and his colleagues worked together with him during the foundation process. “We said that it was extremely fortunate that Hocabey was the leader at that time, and from today’s perspective it’s very clear that we weren’t wrong.”

After the Board members’ remarks, the program continued with the Bilkent University Board of Trustees open meeting. (Details regarding the meeting may be found in the article “Board of Trustees Meets, Sets Tuition” on Page 1.)

The final event of this year’s Bilkent Day, a special concert by the Bilkent Symphony Orchestra, took place in the concert hall that evening. Conducted by Gürer Aykal, the program featured Sergei Rachmaninov’s Concerto for Piano No. 2 in C minor, with Gülsin Onay as soloist, and Gustav Holst’s orchestral suite “The Planets.”