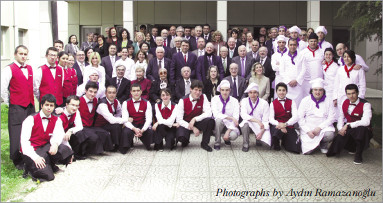 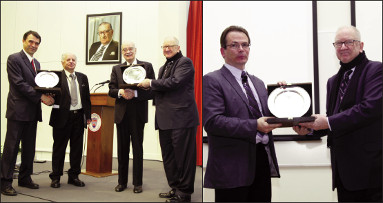 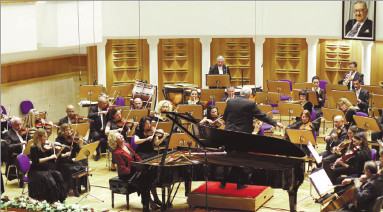 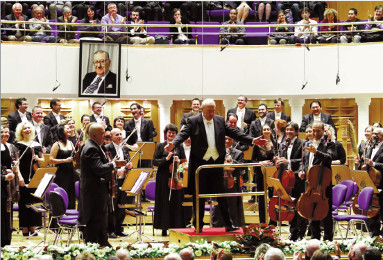 April 3, the birthday of Bilkent’s founder Prof. İhsan Doğramacı, has come to be known on campus as Bilkent Day. This year, marking the 99th anniversary of Prof. Doğramacı’s birth, Bilkent Day included four main events: a celebratory luncheon at Le Piment Rouge Restaurant; İhsan Doğramacı Memorial Lectures; a pair of seminars organized by the Faculty of Science; and a commemorative concert by the Bilkent Symphony Orchestra.

The School of Applied Technology and Management opened the Day on a festive note at Le Piment Rouge Restaurant. A banquet was prepared and served by students of the Department of Tourism and Hotel Management. Guests included the Doğramacı family and members of the university administration. Chef Elif Denizci created a special Anatolian menu for the occasion, and students under her supervision prepared the food. The service was superbly handled by students under the supervision of Service Instructor Ali Ünal. The luncheon marked the continuation of a tradition begun during Prof. Doğramacı’s lifetime, when students of the school prepared and served an annual birthday meal for him, his own family and members of the Bilkent family.

The afternoon events were highlighted by the 2014 İhsan Doğramacı Memorial Lectures, which took place at the Mithat Çoruh Conference Hall. The program opened with introductory remarks by the provost, Prof. Adnan Akay.

Prof. Akay’s remarks focused on Prof. Doğramacı’s vision: “Hocabey’s vision for us is, simply, excellence in everything we do. One lesson to take from his vision is to enrich both mind and soul—through cutting-edge science, through the humanities, the arts and letters, and music—and to do it together with the world. With a rich mind and a rich soul, we must follow in his footsteps, go out and engage with the world, do good things and do them well.”

Next on the program was a short film titled “The Spirit of İhsan Doğramacı.”

Following it, Prof. Tomris Türmen, president of the International Children’s Center, in introducing the guest speakers, also remembered Prof. Doğramacı as a visionary. “He was creative. All of his endeavors and initiatives were human-centered. He invested his life in the improvement of science, health and education, as well as the fine arts, especially music.” In addition, she stressed a second aspect of Prof. Doğramacı’s contributions to humankind, which she called “beyond the child.” “Prof. Doğramacı was a pediatrician,” Prof.  Türmen declared, “who dedicated his life to the health and well-being of children everywhere.”

The presentations by the two invited guest lecturers, distinguished physicians and colleagues as well as friends of Prof. Doğramacı, offered their personal insights into his life and work.

Prof. Giuseppe Benagiano of La Sapienza University in Rome, an internationally known obstetrician and gynecologist who has dedicated his life to serving as an active global advocate for women’s health, titled his talk “İhsan Doğramacı, a Giant and a Friend.” He spoke about Prof. Doğramacı’s accomplishments and also shared his memories of him. Summing up his feelings about Prof. Doğramacı he said, “I am proud to have been called a friend by Prof. İhsan Doğramacı. Death does not exist. We die when we are forgotten. We may be sure that my dear, precious friend İhsan Doğramacı will not be forgotten.”

The second lecture, titled “Remembering a Great Man and His Noble Mission,” was given by Prof. Mahmoud F. Fathalla of Assiut University in Egypt. Prof. Fathalla, recognized worldwide as an exceptional leader in the cause of promoting women’s health and rights, talked about the days when he first met Prof. Doğramacı. He related how he had learned over the years that this individual was a man of compassion, a man of determination and a man of vision. Like the other speakers, Prof. Fathalla emphasized Prof. Doğramacı’s ongoing legacy, referencing the words of a nineteenth-century writer: “What we have done for ourselves alone dies with us; what we have done for others and the world remains and is immortal.”

Prof. Doğramacı’s birthday was also commemorated by a two-part lecture by the acclaimed geneticist Dr. Evan E. Eichler, who spoke at the invitation of the Faculty of Science. Dr. Eichler described the creation, proliferation and evolutionary significance of segmental duplications in a seminar on “Dynamic Mutations and Human Genome Complexity,” and highlighted their implications for the diagnosis and therapy of intellectual disabilities in the follow-up talk “Autism Spectrum Disorders: New Mutations, Genes and Pathways.” Found more frequently in humans, gorillas and chimpanzees than in any other species, hubs of duplicative activity (also called “duplicons”) on the one hand confer a selective advantage by fostering the development of new genes, but also create genomic instability that may invite disaster when a crucial gene cluster is deleted in its entirety. Dr. Eichler detailed how large, duplicon-associated deletions, and the associated variance in gene copy numbers, may account for a considerable portion of autism spectrum disorders.

The celebration of Bilkent Day came to a conclusion in the evening, with a special commemorative concert by the Bilkent Symphony Orchestra. The performance, conducted by Maestro Neeme Jarvi, took place at the Bilkent Concert Hall. The program consisted of Chopin’s Piano Concerto No. 2, with Gülsin Onay as soloist, and Tchaikovsky’s “Swan Lake Suite.”

With contributions by Alper Özkan  (MSN/PhDIII)