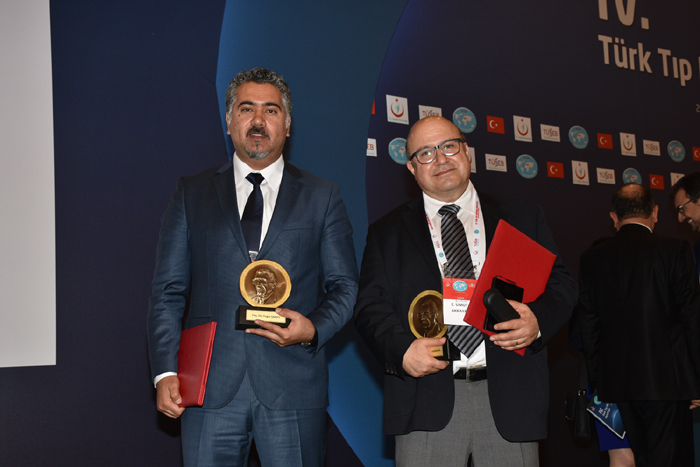 At a ceremony held in İstanbul last week, Prof. Engin Umut Akkaya of the Department of Chemistry and UNAM and Asst. Prof. Özgür Şahin of the Department of Molecular Biology and Genetics and UNAM were presented with awards by TÜSEB (the Health Institutes of Turkey). Named after Nobel laureate Aziz Sancar, the TÜSEB awards honor outstanding work by the country’s researchers in fields related to the health sciences.

Prof. Akkaya received the Aziz Sancar Science Award, TÜSEB’s highest accolade. The Science Award, given for the first time this year, is to be presented annually to a scientist who has made internationally significant contributions to the advancement of the health sciences and technologies. Prof. Akkaya received the award for his research in radically transforming the photodynamic therapy of cancer.

Dr. Şahin was the recipient of a TÜSEB Aziz Sancar Incentive Award. These awards are given to a maximum of five recipients each year: scientists under the age of 40 who have proven their potential to contribute to science at an international level. Dr. Şahin received his award for his cutting-edge research in the field of cancer biology.