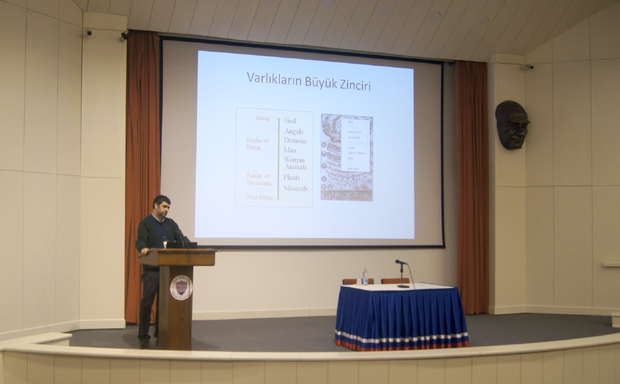 Last weekend, March 22-23, the Bilkent Horizons in Evolution Symposium was held by the Bilkent Genetics Society. The Society’s chairman, Ali Cihan Usluel, and its general coordinator, Onur Özer, initiated the event in order to explore Charles Darwin’s theory of evolution from the perspective of a variety of scientific disciplines.

The speakers included Prof. Aslı Tolun, who explained the genetic basis of evolution, and Assoc. Prof. Ergi Deniz Özsoy, who stated that the theory of evolution gives the best scientific explanation for the origin and history of life on earth.

To refute various misconceptions regarding evolution, Assoc. Prof. Hasan Aydın, a theologian, spoke about the philosophical distinctions between science and belief. Other speakers discussed the large amount of evidence that supports the theory, such as paleontological findings concerning human ancestors, transition forms and morphological resemblances.

One of the most interesting parts of the symposium was the presentation by Prof. Namık Kemal Pak, former chairman of TÜBİTAK. Describing the formation of matter and the universe, he implied that humans are the children of stars, and stated that the meaning of life is provided by us. The final speaker, Dr. Metin Berberoğlu, offered insights provided by the field of evolutionary medicine. He described the footprints of evolution seen in the human body, with reference to the “tree of life,” the presence of vestigial organs and the existence of human diseases caused by adaptations on the part of microorganisms.