A University of Cambridge research team led by Mete Atatüre, a 1996 graduate of the Bilkent University Department of Physics, has succeeded in observing “squeezed” light in a manner previously thought impossible. In doing so, the researchers reduced the electromagnetic noise associated with photons (individual particles of light) to less than that measured in the complete absence of light.

Dr. Atatüre is a fellow of St. John’s College and a member of the Department of Physics/Cavendish Laboratory at the University of Cambridge. His team’s work was recently reported in the journal Nature (“Quadrature Squeezed Photons from a Two-Level System, Nature 2015; doi: 10.1038/nature14868).

The significance of their achievement is explained in a news item published on the Cambridge website, summarized and excerpted in the following paragraphs:

“Squeezing is a strange phenomenon of quantum physics. It creates a very specific form of light which is ‘low-noise’ and is potentially useful in technology designed to pick up faint signals, such as the detection of gravitational waves.”

Previously, light had been squeezed by firing a laser beam at a material to produce the desired effect. Theoretically, however, another possible technique has been known for over 30 years. Called squeezing of resonance fluorescence, it involves exciting a single atom with a very small amount of light. According to this theory, the light scattered by the atom should also be squeezed.

Up to now, the experiment to observe this phenomenon had been considered so difficult to perform as to make it impossible to measure the squeezing of photons in this manner. As Dr. Atatüre put it, “It’s one of those cases of a fundamental question that theorists came up with, but which, after years of trying, people basically concluded is impossible to see for real—if it’s there at all.” 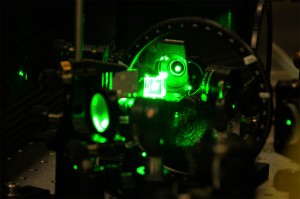 The team of physicists led by Dr. Atatüre finally overcame the difficulties involved in the process and succeeded where others had not. By using an artificially constructed atom known as a semiconductor quantum dot, they “were able to observe the light as it was scattered, and prove that it had indeed been squeezed.”

Mete Atatüre received a BS degree from the Bilkent Department of Physics in 1996, and then joined the Quantum Imaging Laboratory at Boston University for his PhD studies. From 2002 to 2007, he worked as a postdoctoral fellow in the Quantum Photonics Group at ETH Zurich.