In 2019, a team of seven entrepreneurs – including Bilkent graduates Aziz Fırat Avşar (IE ’17), Gülşebnem Sayın (GRA ’18), Kürşad Can Mutlu (CTIS ’16) and Mert Gür (CS ’17) – got together and established a mobile gaming company, which they named Loop Games.

Since then, games developed by the Ankara-based company have been downloaded more than 50 million times on iOS and Android platforms; in 2020, Loop Games made $20 million in game sales. Currently, Loop’s daily active user count is three million. From development to publishing and marketing, the Loop team has been handling all aspects of creating new games and getting them to users.

Now, the international mobile games publisher Tilting Point will be investing up to $60 million in user acquisition for “Match 3D,” Loop’s most successful game up to this point. The investment, Tilting Point’s largest to date, will be used to accelerate the growth of the game. 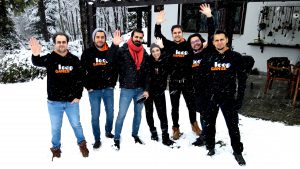 Loop Games’ biggest markets are the US, Japan, England and Germany. The company is planning to release five more games in 2021.