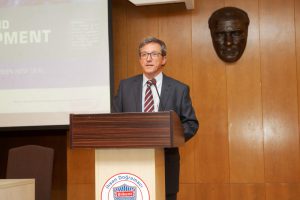 A presentation by Prof. Erinç Yeldan, acting dean of FEASS, introduced the report; a panel on the current problems of the developing world followed, in which Prof. Özgür Orhangazi from Kadir Has University, Assoc. Prof. Sevil Acar from Boğaziçi University and Dr. Elif Karaçimen from Recep Tayyip Erdoğan University presented papers on the problems and prospects of developing economies in the 21st century.

In his presentation, Prof. Yeldan remarked that we are currently living through the extremes of the “Age of Anxiety,” with faltering productivity growth, stagnant investment, declining wage incomes and increased global inequality and social exclusion, all intensified by the threat of climate change and warming of our planet.  Yeldan quoted Richard Kozul-Wright, director of the UNCTAD division responsible for the report, who contends that “the global economy does not serve all people equally. Under the current configuration of policies, rules, market dynamics and corporate power, economic gaps are likely to increase and environmental degradation intensify.”

The report argues that since the global financial crisis, market-friendly solutions to these global challenges have failed to push economies in a more economically, socially and environmentally sustainable direction. This year’s report casts doubt on proposals to do more of the same: to finance development objectives via speculative flows of international finance through blending scarce sources using products and techniques taken from the playbook of banking conglomerates.

Instead, the report sets out a series of measures and reforms that would give the public sector the lead in financing a Global Green New Deal, and calls on the international community to find the political will to advance such an agenda.

The report recasts the US government’s signature policy of the post-1930 Great Depression Era on a global scale as this Global Green New Deal, presenting it as the right policy framework to make a clean break with years of austerity and insecurity following the global financial crisis, help bring about a more equal distribution of income and reverse decades of environmental degradation. It proposes a series of reform measures to make debt, capital and banks work for development and finance a deal.

Projecting an annual increase in total green investment of 2 percent of global output – around US$1.7 trillion, or just one third of what is currently spent by governments on subsidizing fossil fuels – could, UNCTAD economists estimate, generate a net increase in global employment of at least 170 million jobs, with cleaner industrialization in the South and an overall reduction in carbon emissions by the target year of the UN’s 2030 Agenda for Sustainable Development.

The appropriate policy package will vary from country to country, but all such packages will involve fiscal stimulus, public investment in infrastructure and green energy, and measures to boost wages, the report stated.