16 November 2021 Comments Off on Bilkent Pays Homage to Atatürk 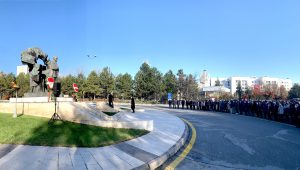 November 10, 2021, marked the 83rd anniversary of the death of Turkey’s beloved Atatürk. As has become customary, Bilkent University commemorated the solemn occasion with a number of events.

In the afternoon, two speakers gave presentations via Zoom. The first presenter was fourth-year Psychology student Doğa Topalak, whose talk was based on her HIST 200 research project, “Refet Angın, One of the Pioneering Woman Teachers of the Republic.”

The talk explored facets of Ms. Angın’s life, starting with her student years during the early Republic. During that time, she had the opportunity to meet Mustafa Kemal Atatürk several times, and those encounters influenced her entire life. She dedicated her career to educating the next generation, and was the first teacher honored on Teacher’s Day when the event was initiated in 1981.

The second presenter, Asst. Prof. Berrak Burçak of the Department of Political Science and Public Administration, spoke on the topic “Atatürk and Public Health.”

In her talk, Dr. Burçak discussed the importance that Atatürk placed upon public health in Turkey during the years 1925–1937, exemplified in his efforts to establish a nationwide public health infrastructure during the early Republican era. A landmark event in this respect was the founding of the Merkez Hıfzıssıhha Müessesesi (Central Public Health Institute) in 1928 in Ankara, thanks to the initiative of the then Turkish Minister of Health, Dr. Refik Saydam.

The Central Institute – later renamed Refik Saydam Merkez Hıfzıssıhha Müessesesi – not only provided basic laboratory services for public health purposes in Turkey, but in addition played a major role in the production of vaccines for both domestic use and export. In 1936 the Institute also opened a school for training doctors who would fill public health positions throughout the country.