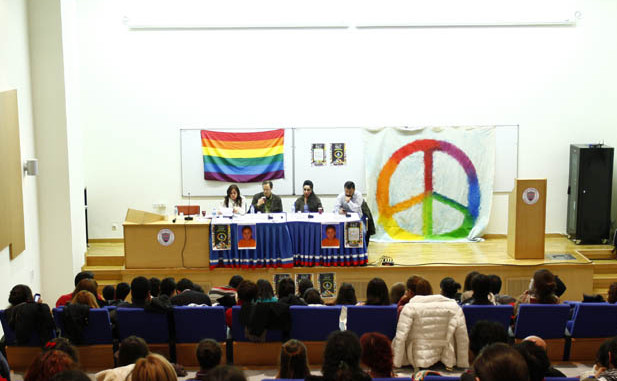 On December 21 and 22, a group of Bilkent students, including members of the student organizations Genç Aydınlanma Kulübü and Renkli Düşün Kulübü, held “Bilkent Peace Days,” an event focusing on the discussion of issues related to peace and democracy. In a format consisting of  six sessions held over two days, a number of well-known speakers came to campus to discuss topics including politics, gender politics, feminism, the peace process, the Kurdish movement, prisons and social peace.

At the first session on Saturday, December 21, the speakers were Meral Akbaş from the METU Department of Sociology and Ahmet Tokoz, a lawyer for Pembe Hayat Derneği, who talked about the unjust treatment of women and LGBT individuals in prisons.

Next, İsmail Saymaz, a reporter for the newspaper Radikal, Ahmet Saymadi from Taksim Solidarity and Sebahat Tuncel, co-head of the HDP, discussed ways to overcome obstacles in achieving social peace.

During the last session of the first day, journalist and writer Tanıl Bora and lawyers Ceren Kalı, Eren Keskin and Efkan Bolaç spoke about the issue of justice.

The first session of the second day featured speakers İhsan Eliaçık, Veli Encü and Garo Paylan, who discussed controversial topics including religion and the state, and what it is like to be an Armenian in Turkey.

The final session of the event, on the topic of gender politics, started with the movie “Nerdesin Aşkım” (which includes images from the LGBT Pride Meeting) and continued with remarks by Yıldız Tar and Levent Pişkin.