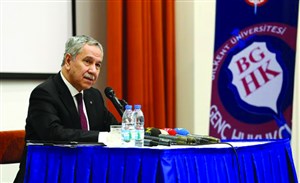 The event attracted tremendous interest from both students and the media. Mr. Arınç began his remarks by commemorating Prof. İhsan Doğramacı, founder of Bilkent University, and his contributions to Turkish education. He also noted that Prof. Doğramacı had been presented with the Turkish Grand National Assembly’s Honor Award during the time that Mr. Arınç was president of the Assembly.

Mr. Arınç then turned to the topic of his lecture, the history of Turkish politics from the founding of the Republic in 1923 up to today. He offered his insights and opinions concerning a number of political issues during that period, including the transition to a multiparty system in 1946, the 1960 military coup, the 1971 memorandum, the 1980 coup and the February 28 process.

Following his talk, Mr. Arınç welcomed questions from the audience and answered them at length.