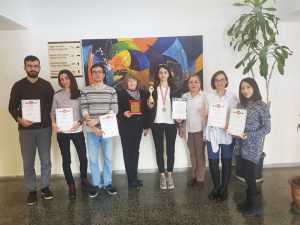 This fall, the Russian Center for Science and Culture (RCSC) held a competition to test the proficiency of university-level learners of Russian in Turkey: the Russian Olympiad. The first round took place in cities across Turkey; the final round was held in Ankara on November 17, on the local premises of Rossotrudnichestvo (the Russian government’s Federal Agency for the Commonwealth of Independent States Affairs, Compatriots Living Abroad, and International Humanitarian Cooperation).

In the event, open to university students in all departments, third-year Computer Science student Süryal Berfu Anıl took first place in the Ankara region at the A1 language level, winning a gold medal. She then went on to place third in the national finals. A total of six Bilkent students – Kenan Derin, Hatice Kübra Geredeli, Hatice İkbal Kılıç, Ayşegül Türkoğlu and Ogün Serkan Yalçın, along with Berfu – were among the top finishers in the first round of the competition. For this achievement, RCSC presented an award to the university.

The success of Berfu and her classmates was all the more remarkable given the fact that Russian is a second foreign language for Bilkent students and is not offered as a major at the university. The students and their instructors expressed a mutual sense of pride in the outcome, with teachers praising their students, and students giving credit to their instructors, Luidmyla Alyeksyeyenkova and Gülnara Tanrıkulu of the Foreign Languages Unit.

“I studied on a regular basis and was really into the Russian language,” said Berfu. “I’m so proud of my teacher and myself.”

Ms. Alyeksyeyenkova, who is Berfu’s teacher, declared, “I’m very proud of my students. Even though the competition included philology department students, my students did extremely well. They so honored me and their Bilkent University education.”

“We believed in our students, and they succeeded in the competition,” said Ms. Tanrıkulu. She noted that even though the study of Russian – which is taught at the basic and intermediate levels at Bilkent – and other second foreign languages involves only four hours of class time per week, “these courses can still give students success, because the foreign language instruction at Bilkent is good in every language unit.”

The award ceremony for the Olympiad, where Berfu received her third-place trophy and the university was given a plaque in recognition of its students’ achievement, took place in the Russian Federation Embassy in Ankara on November 18.