Bilkent Team Excels in IEEExtreme: First in Turkey, Ninth in the World

17 December 2018 Comments Off on Bilkent Team Excels in IEEExtreme: First in Turkey, Ninth in the World 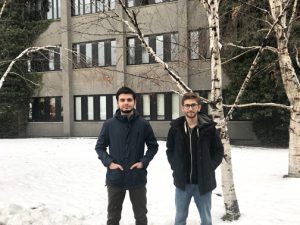 BordoBereliler, a team made up of Bilkent University students Osman Orhan Uysal (CS/II) and Metehan Kaya (CS/IV), took first place in Turkey in the IEEExtreme 12.0 programming competition, held October 20. BordoBereliler also ranked ninth among nearly 12,000 international participants (above 4000 teams), and was awarded a prize by IEEE (the Institute of Electrical and Electronics Engineers).

IEEExtreme is an international 24-hour programming competition that takes place annually, organized by IEEE in countries around the world. In the event, teams of IEEE student members – advised and proctored by an IEEE member, and often supported by an IEEE student branch – compete to solve a set of programming problems within the allotted 24 hours.