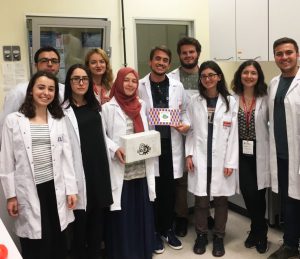 On October 28, a team of undergraduate students studying and working in the Department of Molecular Biology and Genetics and UNAM won a silver medal in the 2018 iGEM competition, an annual, worldwide synthetic biology event held by the International Genetically Engineered Machine Foundation (iGEM). For the competition, each team designs, builds and tests a genetically engineered system using standard molecular biology techniques.

At Bilkent, the UNAMBG team members have been working as undergraduate researchers under the supervision of Asst. Prof. Urartu Özgür Şafak Şeker (UNAM) and Assoc. Prof. Ali Osmay Güre (Department of Molecular Biology and Genetics). Three of the team members, Deniz Çayırtepe, Ahmet Hınçer and Mehmet Ali Hoşkan, all MBG students, participated in the final project presentations at the 2018 iGEM Giant Jamboree.

The Bilkent UNAMBG team’s medal-winning project was aimed at combating the increasing risk of antibiotic resistance – a risk that has the potential to turn into a nightmare for humankind. The project, named “The Last Penicillin Binder,” involved genetically engineering a penicillin-binding peptide (PBP1b) in order to enable bacteria that were provided with magnetic properties via the expression of another genetically engineered protein (bacterioferritin) to collect/remove penicillin from city wastewater. The contaminated water would be cleansed of antibiotics by using an external magnetic force to collect the penicillin-bound bacteria. The overarching goal of the project was to minimize or prevent the incremental increase in antibiotic resistance by offering an alternative wastewater treatment method that could eliminate the trace amount of antibiotics triggering the resistance.

The UNAMBG team receives financial support from Bilkent University and Bilkent UNAM, and support for their laboratory studies from the Synthetic Biosystems Laboratory at UNAM. The Bilkent UNAMBG team is seeking members for the 2019 iGEM competition not only from MBG, but also from other departments, including but not limited to CHEM, EE, CS, ME and CTIS.

The competition is the iGEM Foundation’s main program. The independent, nonprofit organization is dedicated to the advancement of synthetic biology and education, and through the competition encourages undergraduate students to tackle everyday issues facing the world by using genetic engineering. Initiated by the Massachusetts Institute of Technology, the annual competition has been held since 2004.