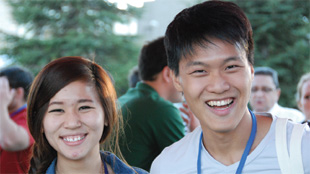 Bilkent welcomed the students with two separate orientation programs held by the Office of International Students and Exchange Programs. Both groups had the opportunity to meet Rector Abdullah Atalar when he gave a talk welcoming them to Bilkent. Other sessions included an introduction to campus and workshops on topics ranging from”The Turkish Way of Living” to “Critical Thinking,” as well as Turkish language classes. The orientation program also featured a city tour.