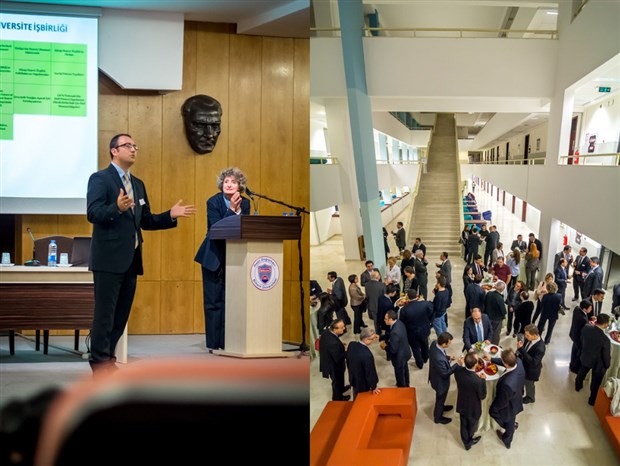 Last week, Bilkent graduates working in the public sector participated in a networking event organized by the Career Center and held in the C-Block auditorium. Rector Abdullah Atalar, speaking to the gathering, noted that our alumni have been able to bring new ideas and insights to their work in public service as a result of the broad knowledge base and critical thinking skills they gained here at Bilkent.

Bilkenters, he said, will undoubtedly make their presence known in this field in the near future; meanwhile, we should work in close collaboration with our graduates and increase the number of Bilkenters in the public sector.

Career Center coordinator Yıldız Balamir Öztürk, as host of the event, gave a brief presentation about a prospective project of the center targeted at doing just that. Only three percent of Bilkent graduates have opted to work in the public sector, she stated. The major public institutions employing the highest number of Bilkenters are the Ministry of Foreign Affairs, the Ministry of the Economy and the Undersecretariats of the Treasury. Ms. Öztürk also related how the center had started public sector recruitment projects around the end of the 90s, noting that although considerable progress has been made so far, the true potential for employment of our graduates in the sector is greater still.

One of the alumni working in the public sector is Hüsnü Ada (IR/01’), head of section at the Ministry of the Economy. Mr. Ada briefed the attendees about future collaboration between graduates and the university. Starting this academic year, Bilkenters working in the public sector will be making a substantial contribution to the various career programs on campus, serving as guest speakers in courses, sharing their career experiences with students and mentoring prospective candidates for public service. He also called upon alumni to be more involved in building bridges between their institutions and the university.

The presentations closed with a question and answer session on how Bilkenters could contribute to career-related projects at the university. After this, the alumni in attendance enjoyed networking and sharing memories of their Bilkent years at a reception.