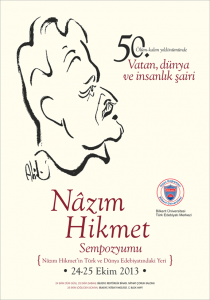 The Turkish Literature Center of Bilkent University will present an international Nâzım Hikmet Symposium on Thursday and Friday, October 24-25, in observance of the 50th year of the poet’s death. The theme of the symposium is “Nâzım Hikmet, Poet of Turkey, the World and Humanity, and His Place in Turkish and International Literature.”

The symposium, scheduled to take place at Mithat Çoruh Auditorium (all day Thursday and until noon on Friday) and at FEASS C-Block Auditorium (Friday afternoon), will feature as keynote speakers the noted novelist and author of three Nâzım Hikmet studies, Dr. Nedim Gürsel, who will come from France; Dr. Murat Belge, professor of comparative literature at Istanbul’s Bilgi University; and Dr. Aron Aji, professor of comparative literature and dean of arts and literature at St. Ambrose University, who is flying in from the US. Two renowned journalists, Refik Erduran and Orhan Karaveli, will relate their reminiscences of Nâzım Hikmet. NTV journalist Mete Çubukçu’s Nâzım Hikmet documentary will be a special feature of the opening session. (There will be several other documentary films in the later sessions.) 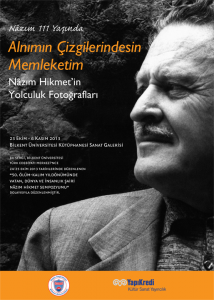 In addition to guest speakers from numerous Turkish universities and from abroad, several faculty members in Bilkent’s Department of Turkish Literature — Prof. Semih Tezcan, Dr. Hilmi Yavuz and Prof. Talât Halman — will discuss Nâzım Hikmet as a poet. Dr. Nermin Yazıcı, a visiting faculty member at Bilkent and chairperson of the Department of Turkish Education at Hacettepe University, will serve as the symposium’s mistress of ceremonies.

In conjunction with the symposium, the Bilkent University Library will host an exhibition of Nâzım Hikmet photographs, opening at 5:30 p.m. on October 23 and running through November 6. Entitled “Nâzım at Age 111 – My Country in the Furrows of My Brow,” the exhibition was previously presented by Yapı Kredi Publishing in Istanbul; the Bilkent showing will be the first in Ankara. At the final session of the symposium, the exhibition’s curator, M. Melih Güneş, will deliver a talk entitled “Nâzım Hikmet: Poems and Plays Missing From His Complete Works,” in which numerous hitherto unknown poems and plays by the author will be discussed. Mr. Güneş will also read Nâzım’s lost 1951 poem, “Hanri Marten’s Voice,” which he translated into Turkish from its Russian version. This will be the poem’s world premiere.

Yet another symposium event will be a recital of Nâzım Hikmet poems. The well-known theater artists İpek Çeken and Tuncer Yığcı will recite the poems at Mithat Çoruh Auditorium at 6 p.m. on October 24.