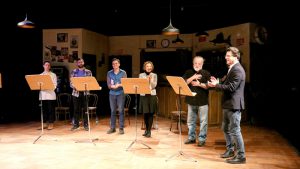 Bilkent International Laboratory Theater (BILT) has resumed its 2020 Stage Reading Series Lab of new Turkish plays where it left off earlier this year due to the pandemic. The readings are conducted by BILT members, and casts include Bilkent Department of Performing Arts graduates, faculty members and students. The third play in the series, “Şirket” (Company) by Ali Uygur Selçuk, had its reading on November 9, and the fourth, “Değirmen” (Windmill) by Rana Zan, on November 16.

BILT, an initiative of the Bilkent University Department of Performing Arts, is a professional theater company whose core members – Koray Alper (THEA’14), Efe Çetinel (THEA ’17), Elif Kaman (THEA’17), Barkın Kenan (THEA ’17) and Pelin Şahin (THEA ’17) – are graduates of the department and also teach in the Bilkent “Theater for Kids” program. The general artistic director of the initiative is Jason Hale, chair of the Department of Performing Arts.

The company was founded last year, and Mr. Kenan’s “Branch 77” was the first play developed and produced by BILT, in accordance with the company’s mission to premiere new works with an emphasis on promoting and encouraging the work of contemporary Turkish playwrights.

“We modeled BILT after similar professional companies connected to theater departments in the US, such as Yale Repertory Theater,” said Mr. Hale, describing the genesis and mission of the initiative. “Our emphasis is not necessarily on creating a season of productions, but more on encouraging Turkish playwrights and making their voices heard in Turkey and the rest of the world.”

The company aims to nurture the development of new plays for the stage, conducting readings, rehearsals, open rehearsal workshops and, ultimately, productions, with the author included in the process.

Last November BILT put out a call to contemporary playwrights in Turkey, requesting them to submit new plays to BILT. After evaluating 55 submissions, the members selected 10 plays to be read in front of a live audience, this being the Stage Reading Series Lab.

The stage readings, a form of theater without sets or full costumes where the actors read from scripts, will allow BILT to evaluate plays as potential candidates for production in its repertory.

“When a play is read aloud on stage, it is understood more theatrically,” declared Mr. Hale. “We felt that the 10 plays selected represented different styles and genres and also were of sufficiently high quality in terms of both writing and storytelling to merit reading in front of a live audience.”

Following completion of the entire series of readings, the company plans to choose one of the plays for development and production. Feedback from audience members, who are asked to fill out an evaluation form after each reading, plays “a valuable role” in the selection process, according to Mr. Hale.

The stage readings, which take place in the Bilkent Concert Hall or the Main Theater Hall, begin at 7 p.m. The remaining readings will be on November 23 and 30, and December 7, 14, 21 and 28. Students taking GE250/1 who attend a reading will receive 20 points for the course.