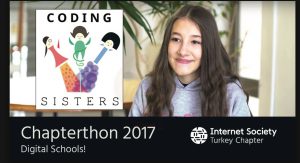 Last November, members of the student organizations BILWIC (Bilkent Women in Computing) and TDP (Social Awareness Projects) implemented a project aimed at optimizing opportunities for girls to become involved in the STEM fields and internet studies. Called “Coding Sisters,” the project was BILWIC’s entry in Chapterthon, a global event organized annually by the Internet Society (ISOC). When the ISOC announced the 2017 Chapterthon results in December, at the Internet Governance Forum in Geneva, Switzerland, “Coding Sisters” was named the best project worldwide.

The theme for Chapterthon 2017 was “Digital Schools”; projects were required to either promote digital literacy, provide online instruction, train people in the community, or develop connectivity for an educational institution. A total of 31 projects were submitted by chapters from five continents.

“Coding Sisters,” which offered instruction in coding to female middle- and high-school students, was the only project from Turkey. Its ultimate goal was to help close Turkey’s gender gap in the STEM fields by educating young people on how women can be successful in technology with the help of digital tools. The ISOC, in announcing the BILWIC project as this year’s Chapterthon winner, praised its potential impact: “Coding Sisters is a proof of how the Internet is a powerful enabler not only for education but also for gender equality.” 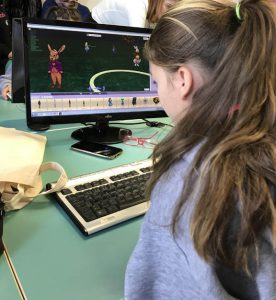 The day-long “Coding Sisters” event took place on November 12. Twenty volunteer instructors from BILWIC and TDP worked with over 40 girls who came to Bilkent to receive beginner-level instruction in coding.

The application used to provide the training was Oracle Academy’s “Alice” program, which allowed the volunteer instructors, together with trainers from Oracle, to create 3D platforms and games for the use of the trainees. As soon as the young participants learned the basics of the program, they eagerly began to create their own programs. “In an environment where their creativity was not hampered by external factors, each one realized her potential,” remarked a BILWIC member who served as one of the instructors. “The students’ interest in coding surfaced; maybe Coding Sisters will have served as the first training session for some future engineers.”

After the instructional portion of the event, the instructors and students strengthened their new bond as “coding sisters” over lunch in one of the university dining halls, where they enjoyed conversing and getting to know each other. The day wrapped up with a short tour of Bilkent University, where the young visitors had an opportunity to ask questions and get a look at the campus and its facilities.

BILWIC is a student chapter of the international organization ACM-W (the Association for Computing Machinery–Council on Women in Computing) and a student club at Bilkent University.