BITCHES BREW, OR THE BIRTH OF JAZZ FUSION

18 November 2013 Comments Off on BITCHES BREW, OR THE BIRTH OF JAZZ FUSION

In April 1970, Miles Davis released “Bitches Brew,” which completely changed the direction of the jazz movement and resulted in the formation of many jazz fusion bands

As someone who worked at the frontier of the jazz music movement in the 20th century, Davis experimented with many different genres of jazz, including cool jazz, hard bop, bebop and modal jazz. His open-mindedness first resulted in the release of “In a Silent Way,” which can be labeled a jazz fusion album, but a more remarkable and groundbreaking work was his next album: “Bitches Brew” (BB).

In the late 60s, rock music and the hippie movement were on the rise, and at the climax of all this, the legendary Woodstock music festival combined the two for three days in 1969. It is — maybe or maybe not — a strange coincidence that most of the songs on BB were recorded just a couple of days after the festival. But before going into more detail about that, I want to briefly discuss Frank Zappa’s contribution.

Zappa was one of the first musicians to merge rock and jazz, in his album “Hot Rats,” which was released in 1969 (with most of the songs having been recorded before Woodstock). The main difference between him and Miles Davis in relation to their contributions to fusion jazz was that Zappa came primarily from a rock background, while Davis’s background was in jazz. The band Chicago also released a jazz fusion record, which was their debut in 1969.

Let me give you some trivia here. Frank Zappa, with his band Mothers of Invention (MOI), was invited to play at Woodstock, but according to the “Class of the 20th Century” television documentary, their answer, reflecting Zappa’s sarcastic side, was, “A lot of mud at Woodstock… We were invited to play there, we turned it down.” He and MOI also parodied the flower punk movement and hippies in their albums, most specifically in “We’re Only in It for the Money,” which features album art making fun of the Beatles’ “Sgt. Pepper’s Lonely Hearts Club Band.”

Now, coming back to BB, I’d like to talk about the musicians playing on the album. This is really essential — there were so many talented musicians who took part in this recording together and then went on in the following years to form their own bands and continue playing jazz fusion. Saxophonist Wayne Shorter and keyboardist Joe Zawinul, for instance, formed Weather Report (which is my favorite band in the genre) after playing on BB. Guitarist John McLaughlin and drummer Billy Cobham took part in the Mahavishnu Orchestra project, again a jazz fusion band. Pianist/keyboardist Chick Corea, along with drummer Lenny White and drummer/percussionist Airto Moreira, 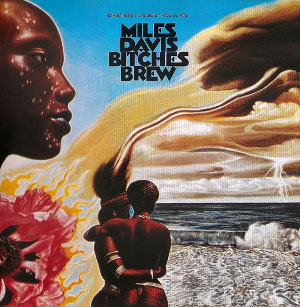 played in Return to Forever, another famous band in the genre. The list is very long, but let me finish by naming two more great musicians, Dave Holland and Jack DeJohnette, who played on BB.

I’ve gotten so carried away about the musicians that I’ve forgotten to talk about the album itself. Let me briefly try to describe this masterpiece. It’s a double album consisting of six songs with a total running time of over 90 minutes. The first thing that comes to your attention is that throughout the album, two drummers are playing in each song, with their channels panned during recording, which gives a really rich and experimental sound. Overdubbing and editing were used a lot in making the album, which was pretty nonstandard in those years, especially in jazz recordings. It’s the post-production that gives BB its unique sound. And the most breathtaking part is that nearly all of the album was recorded with the musicians improvising. Miles Davis composed most of the songs and then just let the musicians improvise during the recording, simply giving them the tempo by snapping his fingers or whispering to indicate solo section timings (in fact, Davis’s voice doing this is audible in the recording).

Now, it’s time to give some suggestions. Instead of single songs, I’m going to suggest albums:

I think I’ll stick to my tradition of changing the genre in my next column as well and talk about the British electronic band Orb. Have a nice week, and stay connected to music!