On December 13, a “Climate Change Event” was held at the Bilkent Laboratory and International School to raise students’ awareness of climate change and other environmental problems. Speakers included Prof. Erinç Yeldan from the Department of Economics, Çelik Tarımcı from Turçev (the Turkish Environmental Education Foundation) and Nevzat Özer from Tema (the Turkish Foundation for Combating Soil Erosion).

One of the most notable things about the event is that it was organized by a BLIS 5th-grade student, Ella Naz Machin. Inspired by the example of 16-year-old environmentalist Greta Thunberg, Ella put her interest in nature and conservation into action, in the hope that young people can make a change for the better in the future. Here, in her own words, is the story of how the Climate Change Event came about. 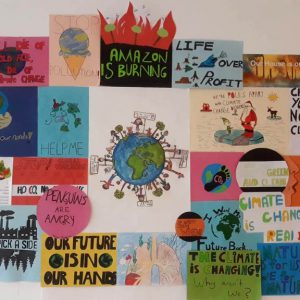 It all started the day when we went to a restaurant to celebrate my brother’s wedding in New York this September. I noticed some sounds and saw people stomping through the streets saying, “There’s no planet B!” or “Strike for the climate!” and all sorts of things at the same time. I told my parents that I wanted to go with them. I ran to go and join them, and they stopped for a bit, they talked about why they were missing school and why that day was so important for the climate. Once we found out they were going to Battery Park to see the speeches of Greta Thunberg and other environmentalists, I wanted to go as well. I said goodbye and we went by taxi. I was so excited. Once we arrived, we were early for Greta Thunberg’s speech so we listened to the rest of the speeches for a bit as well. Once she came on stage, I was jumping up and down with excitement. We watched her lovely speech and it was so cool at one point when  everyone (including me) shouted “Greta! Greta! Greta!” That was really fun. Once we came back to Ankara, when I came back to school, I had an idea of doing a climate strike in the city and I got the opinion of my school’s administrators and they said fine, but they said that the government won’t allow it. So I wanted to do it on the Bilkent campus but that idea didn’t work out either. In the end I decided that I could do an event. I started organizing Greenpeace and WWF to come on the 13th of December, but that date was not convenient for them both. So at that time, and with the great help of a teacher at our school, she and I organized Tema,Turçev and a professor at Bilkent University to come. They all came and at the event, we watched a very sad but good video presentation that the high schoolers made. During the event we first had the speaker from Bilkent University called Prof. Erinç Yeldan and he had a very nice presentation, as well as Çelik Tarımcı from Turçev and Nevzat Özer from Tema.

I learned that because of our environmental problems, our effects on global warming have gone up a lot in the last decade, and we learned how to decrease the amount of carbon in the air.

I really enjoyed the event and at the end, everyone went on the stage and held up their climate posters for a photo. It was fun and informative and I am so glad it happened. I hope we can make more of a change in the future.