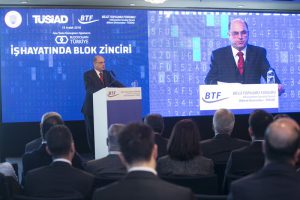 On December 13, the Bilkent University–TÜSİAD Information Society Forum (ISF) held a conference on “Blockchain in Business.” Blockchain technology, which enables the creation of expanding lists of records, or “blocks,” is being increasingly used in business, with cryptocurrency the most prominent application. The conference took place at the InterContinental Hotel İstanbul and attracted more than a hundred representatives of the business sector.

Prof. H. Altay Güvenir, chair of the Department of Computer Engineering and director of the Forum, Filiz Akdede, chair of the TÜSİAD working group on IT and telecommunications, and Erol Bilecik, president of TÜSİAD, gave opening remarks. Mr. Bilecik highlighted the growing role of this technology, saying, “As in the case of every disruptive innovation, it is important to understand the potential of blockchain technology rather than trying to avoid it.”

The presentations began with Ahmet Usta, the author of “Blockchain 101,” reviewing the history of the blockchain as a trust system for registering information and also suggesting the ways in which blockchain technology may be expected impact the future of business. Next, Chris Skinner, author of the books “Digital Bank” and “Digital Human” as well as the blog “The Finanser,”gave a talk titled “Some Day My Chain Will Come,” in which he discussed the effects of blockchain technology in the financial sector.

The following speaker was Alper Günaydın, director at Deloitte Consulting, who presented the results of the “Blockchain in Turkey” survey, comparing them with the results of surveys in other countries. Mustafa Sakalsız, cofounder and CEO of T2 Software, then explained how a blockchain provides trust in an environment where people do not otherwise trust each other. The final presentation, made by Celal Cündoğlu, vice president of Interbank Card Center, focused on the applications of the Hyperledger Fabric and Ethereum platforms.