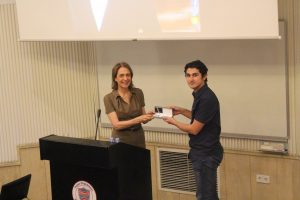 On November 27, the Bilkent International House (BIH) student organization welcomed the ambassador of Bulgaria, Nadezhda Neynsky, to speak at Bilkent. This was the second time BIH has invited an ambassador to visit the campus and speak to students.

Before being assigned to her current position in 2015, Ambassador Neynsky had served in various other posts, including that of Bulgaria’s minister of foreign affairs from 1997 to 2001. She has been a member of the Parliament of Europe since July 2009.

The event was well received and attracted a large number of students. In her speech, Ambassador Neynsky spoke with evident feeling about a number of events and periods during her career, such as the struggle and hard work involved in achieving Bulgaria’s admission to NATO in 2004 and the European Union in 2007. In relating her experiences in politics, Ms. Neynsky emphasized time and time again that achieving everything at once is not realistic; one needs to learn to compromise and understand that every significant change and improvement takes time and patience.

At the end of the event, a question and answer session was held. The ambassador was more than willing to answer personal questions as well as professional ones, at one point relating to the audience how one of her strongest intentions has always been to establish the role model of the influential woman politician for younger generations. If at least a few students left the auditorium inspired by the speech and thinking about how Ambassador Neynsky’s experience can be of benefit in informing their own goals and ambitions, then to Bilkent International House the event achieved its aim.