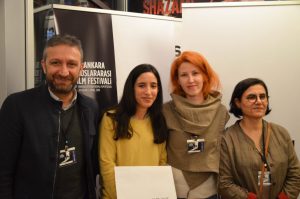 Ms. Yorgancıoğlu was one of ten finalists selected from among just over one hundred entrants in the category; she was selected as the award winner after being interviewed by the jury. The award was announced at a ceremony at the Büyülü Fener Kızılay and presented during the festival’s closing ceremony.

“Karanlıkta Islık Çalanlar” was written and directed by Ms. Yorgancıoğlu, co-written by Emre Gülcan and produced by Sarah Seulki Oh. The film, which explores the phenomenon of aloneness, is about recent retiree Melih’s encounter with a skeptical angel, which triggers an existential awakening. His anxious search for meaning sets in motion a series of events and pushes his wife (an ambitious, social-climbing nurse) and 28-year-old daughter into their own crises; all three struggle to survive this “curse,” both as individuals and as members of a family.