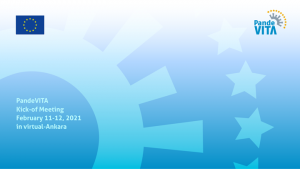 An EU-funded project to develop a platform and smartphone app that will better connect science, government, the economy and the public during a pandemic is being coordinated at Bilkent University. A virtual meeting to kick off project activities took place on February 11 and 12, hosted by the Department of Communication and Design (COMD).

The researchers’ goal is to promote a more efficient transfer of knowledge, at the global level, among scientists, members of the public, government officials and other actors in the political and economic spheres during pandemic-related crises through the development of a platform that will include a smartphone app. The results of the project will be published online at www.pandevita.eu