Coming of Age at Radio Bilkent 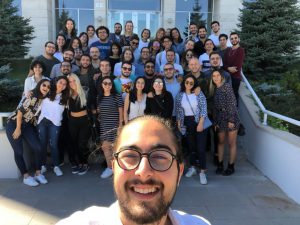 Radio Bilkent’s current general director, Kerem Enhoş, plays a unique role at the station. Staff members describe him as being “like an older brother”; “a mentor who can help you with anything”; “the keystone of the station.”

Kerem’s ability to hold everything together at Radio Bilkent comes in part from his long experience: he has been working there for six years, and is dedicated to the station. What he appreciates most, he says, is how all members of the staff throw their heart and soul into everything they do at the station.

While Kerem has contributed greatly to Radio Bilkent’s successful operation during the past several years, he in turn credits the station with having helped him grow during that period. He cites as examples his greater self-assurance and increased level of comfort in public speaking.

Asked about his goals for Radio Bilkent, Kerem says that he wants to raise the station’s profile so that everyone in Ankara is familiar with it. He also hopes to establish, little by little, a “visual branch” of the station.

With respect to upcoming events, he hints at some major plans for next year, which will mark Radio Bilkent’s 25th anniversary; and in the near term, some surprises for the Spring Festival, where he will be one of the DJs. To find out more, says Kerem, stay tuned to Radio Bilkent!