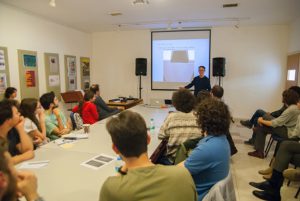 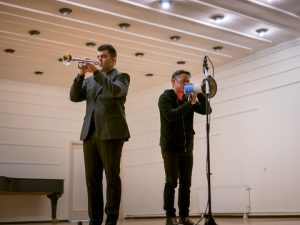 On March 29-31, the composition program in the Department of Music hosted UC Berkeley Assoc. Prof. Ken Ueno, a composer/vocalist/ sound artist and winner of the Rome and Berlin Prizes. During his visit, Dr. Ueno conducted individual lessons for composition students and also gave a seminar where he discussed his approach to music. He was accompanied by Canadian trumpet player Philippe Brunet, who conducted workshops and master classes for both composition and trumpet students.

On Friday, March 30, Dr. Ueno took the Saygun Concert Hall stage as a vocal performer and improvisational composer. The concert was an experimental work, with use of extended vocal techniques such as overtones, throat-singing, multiphonics, extreme registers and circular singing; in addition, architectural elements were incorporated into the music and even used as instruments. Mr. Brunet also took part in the concert, playing selections from the modern trumpet repertoire that included a solo piece written for him by Dr. Ueno. The duo concluded the concert by performing an improvisational segment together.