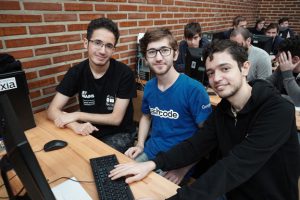 Competing as Team Unagi, Muhammed İkbal Kazar, Orhan Uysal and Oğuzhan Özçelik traveled to Romania to participate in the event, which was held October 18–20 at the Politehnica University of Bucharest. A total of 100 teams took part in the competition; the Bilkent students achieved the best performance among the 10 teams from Turkey at SEERC.