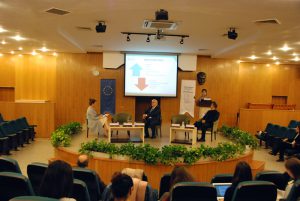 On April 26, a conference on the topic of “Combating Human/Child Trafficking” took place on the Bilkent campus. Organized by the International Children’s Center, the Interior Ministry’s Directorate General of Migration Management and Bilkent University, the event was aimed at raising awareness of this critical issue among university students.

Prof. Bertan stressed the gravity of the problem, declaring that human and child trafficking is a serious crime and a violation of human rights – in effect, a modern form of slavery that tramples upon the most basic values of the human being.

In her remarks, Prof. Özçürümez made the point that human trafficking develops in the context of mobility and should be treated as a global problem that occurs in all countries in various forms, a widespread example being forced child labor in the agriculture and construction sectors.

Mr. Yıldız presented an official perspective with respect to the situation in Turkey, noting that one of the most important objectives of the Directorate General of Migration Management is raising awareness in order to prevent human/child trafficking and facilitating the protection of children from any country who are victims of such trafficking.

The program continued with a panel, in which various aspects of the issue of human trafficking were discussed with particular reference to children.

The first panelist to speak was Birgül Yalınsu, a migration expert in the Migration Management Directorate’s Department for the Protection of Victims of Migration. Ms. Yalınsu described the different types of child trafficking and presented the respective global statistics; she then focused on the problems of forced labor and the forced marriage of children in relation to child trafficking by referring to some notable international cases.

Next, Rıfat Sagut, Supreme Court chief prosecutor from the Court of Cassation, discussed international and national legislation on human trafficking, with particular reference to Supreme Court decisions in Turkey.

The third speaker was Prof. Betül Ulukol, chair of the Ankara University Faculty of Medicine’s Department of Social Pediatrics, who noted that child trafficking occurs in the travel and tourism sector as well as in the areas previously discussed. She described suspicious circumstances that can serve as indicators of child trafficking and child sexual exploitation in this sector, as well as emergency situations that may occur.

The final panelist, Hakan Keçe, unit manager for the Ministry of Labor, Social Services and the Family’s General Directorate of Child Services, explained how Turkey’s Child Protection System operates, stressing the fact that the most important mechanism for child protection is the notification/complaint process.