CS Student a Member of Winning Team at PennApps XIII 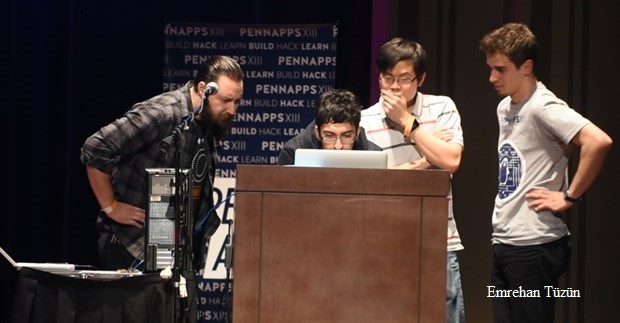 Bilkent student Emrehan Tüzün (CS/IV) was a member of the four-person team that won PennApps XIII, the most recent iteration of the US’s foremost and largest collegiate hackathon. Team RAMEAR’s winning project demonstrated the transmission of data from a completely disconnected computer to a radio receiver.

PennApps, held semiannually at the University of Pennsylvania, encourages engineering students to develop and showcase their skills, and has spawned an entire “league” of hackathons since its beginnings in 2009. Approximately 1,400 participants from 100 universities around the world spent 36 hours developing applications during this year’s event, which took place the weekend of January 22-24.

Along with Emrehan, the members of the winning team were Rob Roy Fletcher (University of Pennsylvania PhD candidate in physics) and Tom Hartley and Fu Yong Quah (second-year undergraduates at Imperial College London).

RAMEAR was so named because it acts as an “ear” that “listens” to a computer’s random-access memory (RAM). The team demonstrated that their program was able to leak data from a computer with no connection and that this data could be reconstructed on another computer with a radio receiver. The team took advantage of the fact that all electronics naturally generate radio waves while running electricity through wires.

They used their computers in a specific way to access computer memory, and this increased the radio noise on the RAM’s frequency. Their program repeated this access in binary periods to and from the target computer with no wireless connection. Finally, the team listened to the RAM’s radio frequency channel and used signal processing techniques to reconstruct the data they had sent from the computer.