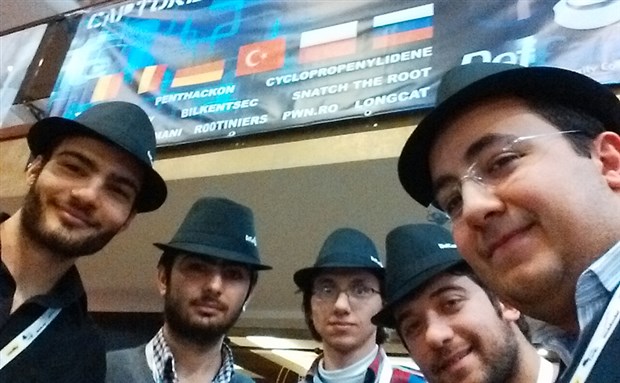 A five-student team from the Department of Computer Engineering came in fourth in the two-round D-CTF (Capture the Flag) competition held at the DefCamp #5 International Hacking and Information Security Conference. The conference took place November 25-29 in Bucharest, Romania.

The Bilkent team, consisting of Furkan Mustafa Akdemir, Murat Demirbüken, Alper Gündoğdu, Cihad Öge and Yusuf Özkaya, was among 951 teams from around the world to participate in the online first round of the competition. The CS students qualified for the second round in Bucharest, where they represented not only Bilkent but also Turkey, as the only Turkish team in the finals.

In the Jeopardy-style final round, consisting of various problems and questions in categories such as networking, exploiting, web hacking, reverse engineering and social engineering, “BilkentSec” ranked 4th among 10 teams.

During the event, the team had opportunities to meet many interesting people, including speakers at the conference as well as Turkish engineers working around the world.

Team members described their feelings: “Our dream was to come in first and bring the honors back to Turkey. Even so, we are happy with the good result in our third competition as a team. We’ll now focus on our upcoming matches. We thank our department and appreciate their support, which helped us attend the event in Bucharest.”