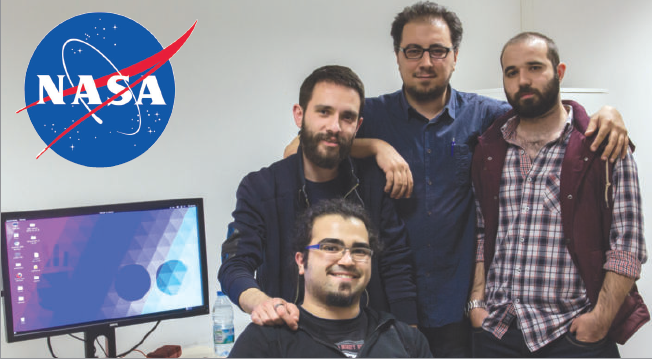 A team of senior students in the Department of Computer Technology and Information Systems has earned the right to represent Turkey in the next round of NASA’s International Space Apps Challenge. The annual challenge is an international mass collaboration focused on producing open-source solutions to advance space exploration and improve life on Earth.

The CTIS students, Ahmet Cemil Sabır, Efecan Yılmaz, Özenç Kale and Göktuğ Serdar, decided to enter the challenge because they saw an opportunity to use the experience they had gained working on their senior project to put together a similar project for the event.

The first round of the challenge took place in cities around the world over 48 hours on April 12-13. In Turkey, the venue for this phase was Sabancı University’s Information Center. On the first day, participants developed and finalized their projects, which they presented to a jury on the second day. From among a total of 13 submissions, the jury chose 2 projects to continue on to the global elimination phase. One of these was the Bilkent team’s “Project Greenagent.”

Team members related how “Greenagent” had come about. “Since one of the challenge topics, ‘Growing Food for a Martian Table,’ had a focus similar to that of the senior project we have been developing, we opted to work on a solution for this issue,” explained Cemil. “Participants were required to develop a conceptual model of a greenhouse that could be deployed on Mars before astronauts arrive, providing them with fresh food supplies.”

Efecan noted that their project has gone above and beyond what was required. “We not only designed an innovative greenhouse; we exceeded the challenge goals by including features such as Martian soil enrichment, biomass generation on Mars, high modularity for expansion and manufacturing for specifically tailored structural elements.”

The next phase of the challenge involves refining the project and making a 30-second video. Though this stage will be tougher, with many more participants from all around the world competing, the team members are excited and remain confident that they have a fighting chance to make their mark in this competition and possibly on the future of humanity on Mars.

More details about Project Greenagent may be found at https://2014.spaceappschallenge.org/project/project-greenagent.