David Will Always Be Remembered

02 March 2021 Comments Off on David Will Always Be Remembered 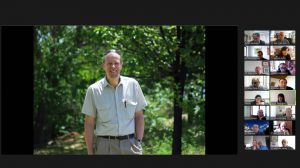 As previously announced, Dr. David Davenport of the Department of Computer Engineering passed away on Tuesday, February 16, 2021, after 35 years of service as a faculty member at Bilkent University. On March 1, family, friends and members of the university community gathered for an online memorial to Dr. Davenport.

Those in attendance included his spouse Güneş Davenport, daughter Derya Davenport and other family members as well as many friends, colleagues and current and former students who shared memories and offered their condolences.

The ceremony began with opening remarks by Prof. İbrahim Körpeoğlu, chair of the department of Computer Engineering, after which Rector Abdullah Atalar and Faculty of Engineering Dean Ezhan Karaşan spoke. The next speaker was Dr. Davenport’s daughter Derya, who shared a heartfelt remembrance of her father. His colleagues then one by one recounted fond memories of Dr. Davenport, following which alumni messages were read.

The remarks and messages touched on many aspects of Dr. Davenport’s life and character, including his inspirational teaching, his sense of humor and his warmth; his love of coffee, tea, photography, reading and walking with friends; and above all, his ever-present smile.

For those who wish to send condolences or express their feelings about Dr. Davenport, a virtual condolence book can be found at at http://taziye.bilkent.edu.tr/DavidDavenport/