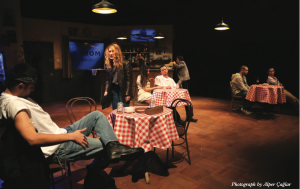 I. Stravinsky | Symphony in C major

A. Khachaturian | Waltz from “Masquerade”

P.I. Tchaikovsky | “Waltz of the Flowers” from “The Nutcracker”

“What Is Reality and How Can I Find It? Plato, the Gracious Quran and Romance” by Prof. Victoria Rowe Holbrook (Bilgi University), at FEASS, C-Block Auditorium, 3:40 p.m. Organized by the Department of Turkish Literature.

“Eighteenth-Century Tragedy and the Creation of Whiteness,” by Dr. Angelina Del Balzo (Bilkent University), in the Library Art Gallery, 5:40 p.m. Organized by CCI.

“Why Does Social Cohesion Matter in the Forced Migration Milieu? When Practices Inspire Concepts in the EU and Turkey,” by Assoc. Prof. Saime Özçürümez, in the Library Art Gallery, 12:40 p.m. Organized by the Jean Monnet Module on European and International Migration Law.

“The Actor’s Nightmare,” staged by Department of Performing Arts students, will take place at 8 p.m., in the Chamber Theater Hall. For tickets: https://ticket.bilkent.edu.tr

“Katman” (documentary about the excavations at Gre Amer in Batman province and their modern cultural context, by Melek Ulagay Taylan with archaeologists Gül Pulhan and Stuart Blaylock), at FADA, FFB-22, 5:40 p.m. Stuart Blaylock will be present to discuss the film after the screening. Organized by HART.