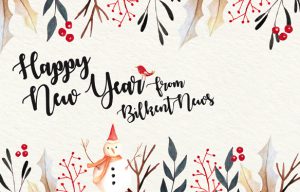 The Bilkent News Editorial Board wishes you a healthy and prosperous New Year – may all your dreams and expectations be fulfilled! The next issue of Bilkent News will come out on February 4.

L. Andriessen | “The Nine Symphonies of Beethoven” for orchestra and ice-cream vendor’s bell

G. Gershwin | “An American in Paris”

A mixed exhibition of paintings and ceramics will be open in the Library Art Gallery every day (except Sundays and Mondays) through January 13. Gallery hours are 11 a.m. to 6 p.m.

Extended Hours at the Library

To help students prepare for final exams, the Bilkent University Main Campus Library is staying open from 8:30 a.m. to 3 a.m. on weekdays and from 9 a.m. to 3 a.m. on weekends through January 14. These extended opening hours apply only to the reading rooms in A Block; there is no circulation service after 11:30 p.m. During this period, the East Campus Library is open from 8:30 a.m. to 11 p.m. on weekdays and closed on weekends.

As a convenience for late-night library users, shuttle service from campus to Tunus Street in the city center will be available every day from December 24 through January 15 (except January 1), with the bus leaving the Main Campus Library building at 3:15 a.m.